Maintenance on the Air Handlers.

My introduction to young Shriners patients was approximately thirty years ago when a six year old boy asked if I would play soccer with him while watching his brother and my son play baseball. I agreed. After a few gentle passes back and forth, he kicked the ball so forcefully that as the ball sailed into the air, it was followed by his prosthetic lower leg! To his delight, I was speechless. His mother then explained he had been a toddler when he received his first prosthetic through Shriners. She stated that Shriners had taken care of his needs for many prosthetic devices as he grew and that Shriners would continue to do so until he was 18 years old – all without cost to the family. She went on to voice her appreciation for the services provided by Shriners. I made my first contribution that year and over the years I have had the privilege of meeting a few other Shriner patient-alumni. 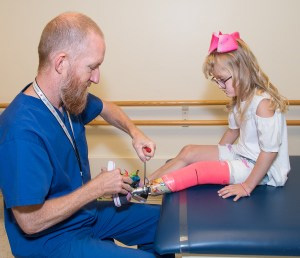 Now some three decades later, I am the 2019 First Lady of Aahmes Shriners in Livermore and, logically, my project is to raise funds for the POPS Unit of Shriners Hospitals for Children Northern California. POPS is the acronym for Pediatric Orthotic and Prosthetic Services. From toddlers to teenagers, kids of all ages seek the care and expertise of POPS. With more than 175 years of combined experience, the POPS team is devoted to designing braces, artificial arms and legs, and adaptive devices that give children the ability to pursue their dreams. The specially-trained orthotic and prosthetic team members take the time to get to know each child. A visit to POPS is about more than measurements and mechanics. It is about sharing hopes and dreams, and providing information that allows the technicians to return to the lab and design the perfect fit. For the teen attending her first prom, it may be a prosthetic leg that slips into high heels. For the aspiring violinist, it is the adaptive device that allows him to grip the bow. Please join me in supporting the POPS team this year.

Keep the doors open on our 22 Hospitals, helping our children have a better life than they would have had if WE did not step in and give them a helping hand.